Maitake mushrooms, commonly known in North America as hen-of-the-woods is a delicious mushroom that grows near the base of trees.

As a culinary treat it’s very tasty and is considered a prized mushroom in Japanese cuisine. It has a rather sweet flavor and a nice texture. It compliments just about any culinary dish.

Hen of the woods naturally grows in the North Eastern USA and mid Atlantic states as well as eastern Canada. It’s rarely found in the northwestern and southeastern states. It’s also common in Japan, and the temperate hardwood regions of China and Europe.

For fruiting of this species indoors, spawn can be started on rye grain. Then transferred to sterilized supplemented hardwood sawdust/chips/bran. Fruiting should begin 6 to 8 weeks from inoculation.  It will generally fruit one or two big cluster of delicious medicinal mushrooms!

Substrates for fruiting: hardwood sawdust, sawdust/chips/bran, oak is best, poplar, cottonwood, elm, willow and alder. Over watering at the fruiting stage of this species should be avoided. Also recommended to lower the humidity during fruiting. This fungi likes temperature swings at the fruiting cycle so don’t think these temperatures are exact. We had this species fruiting in temps outdoors between 50F-78F. 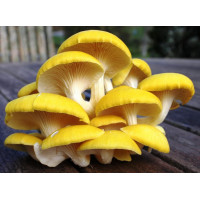 Golden Oyster mushrooms (pleurotus citrinopileatus) are really quite stunning in clusters. This mush.. 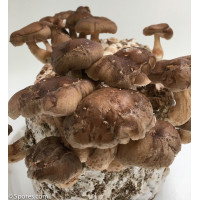 Shiitake mushrooms, lentinula edodes, is probably the most popular cultivated mushroom around the wo..