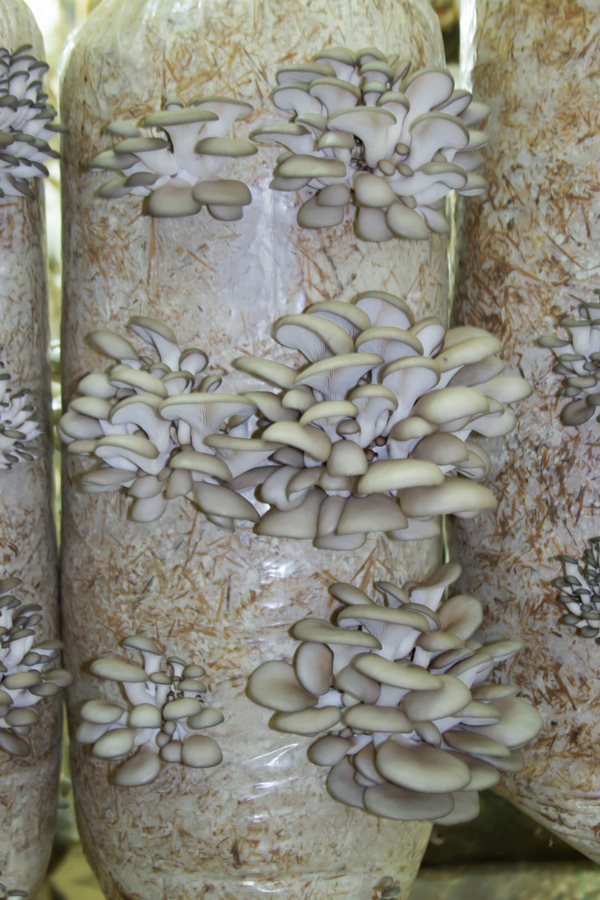 In our warm climate we can only grow this mushroom about 5 months out of the year since it prefers cooler temperatures to fruit, unlike it’s cousin the pearl oyster can fruit in higher temperatures.  We find the blue oyster mycelium tolerates higher temperatures better and contaminates less often when the Arizona heat sets in. But the only way we can get it to fruit is keep it outdoors when temperatures are below 65F. Our indoor growing facility does not get cold enough to fruit this mushroom. This mushroom loves low temperature drops and even does best when morning lows are around the 40’s and 50’s. Our friends in the mountain region grow this species on a large scale and you can see from this picture, this fungi being left indoors it will not produce the deep beautiful blue tones like we produce in smaller tubs outdoors. And just for the record, we do not accept spores from our friends who grow like this because the spores of many mushroom species get thrown all over the grow room and cross spore contamination occurs, which is not good for a spore business. However growing in big bags like this is great for producing mushrooms for restaurants and farmers markets.

Not only is the blue oyster mushroom delicious, but it's one of the easier varieties of oyster mushrooms to grow.  This mushrooms grows on a wide range of substrates including straw (wheat,rye,oat,rice, and barley straw), corn, coffee grounds, banana waste, most hardwoods and hardwood by-products like sawdust and paper, compost and much more. This mushroom truly thrives throughout temperate regions of the world.

Pictured below, blue oyster mushrooms grown on a small scale with natural sunlight. Compare to the photo above grown indoors with artificial light.

Medicinal: Oyster mushrooms are naturally high in lovastatin, a drug approved by the FDA for lowering "bad" cholesterol and raising "good" cholesterol. Higher concentrations of lovastatin are in the caps then the stems, more concentrated on the mature gills, and especially in the spores. 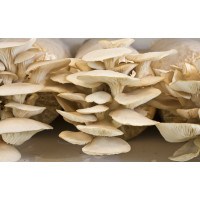 The delicious pearl oyster (pleurotus ostreatus) mushrooms are one of the most common of the oy..